by Scott A. Moulton

I love the smell of selvage in the morning. A new crisp pair of selvage denim jeans has an intoxicating smell. When you run your hands over the material it has a fine smooth high-quality slick feel to them. Raw or Dry Selvedge is an untreated material that has not been washed or had any chemicals added. As you wear them, they will take on a look and feel reminiscent of those old boots you broke in that you never want to part with. The character of these jeans will be obvious and they will develop over time. 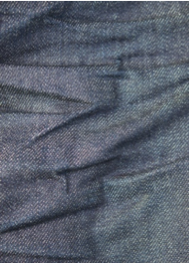 As protection goes, full grain leather often is recognized as king. The best full grain leather can typically withstand 11to 14 seconds of sliding on asphalt and as far as 83 feet before disintegrating. However, as awesome as leather looks, it is much too hot to wear all year-round with summer simply unbearable. 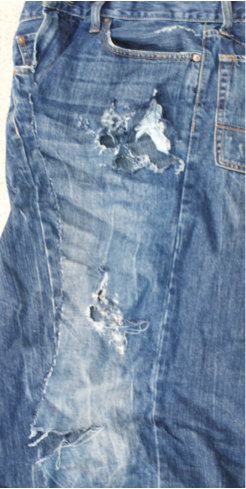 This leaves motorcycle jeans for summer wear, but this is where ugly has a definition all its own for motorcycle riders. Most riders won’t even consider wearing these baggy clown pants. The stigma attached to the “dorkified” jeans is so bad that I could not convince even my own son to wear more protective jeans. My son was focused on how he looked riding rather than consider something less than Abercrombie and Finch.Unfortunately, he paid for it when he was hit by a car. He only slid down the road a few feet, but even that short distance ripped his jeans to shreds. Luckily, my son survived but had burns and road rash along with a broken left femur. His mesh jacket with armor saved his upper body.

While early versions of these pants were anything but stylish, today there ARE more fashionable options with significantly better protection. I want to point your attention to Selvedge Jeans.

Selvedge (Selvage, or Self-Edge) denim is a material that is finished up to the edge. The edge itself is neatly bound, allowing manufactures to use every bit of material without fear it will fray thus keeping a nice clean edge. This became known as the ‘self-edge’ for which we can find references of it being called this as far back as the 1600s. Like a story that school children pass around, eventually the word was mangled into both ‘selvedge’ and ‘selvage’. So what makes these jeans different than the Levis you have been buying the last 30 years?

Once upon a time… denim was made on a ‘shuttle loom’, which is an old style loom that shoots a bobbin back and forth to create fabric. These looms made a thick, very tight material that was stronger but was made in long narrow strips. Because it was narrow, manufacturers used all the material right up to the edge leaving that bound area exposed on the inside. Many manufactures identify the quality of the material by sewing color thread along the edges of the bound material. When a ‘red’ thread was used, it communicates quality and is often referred to as ‘red selvage’. This is usually visible on the inside of a seam or cuff. If you look on the inside of the leg seam you can easily identify if it is selvedge by looking at the edge of the material.

Selvage from this category and quality does not come cheap. Over the years, I have collected several dozen pairs of high-quality jeans. Not all of them were specifically designed for motorcycle riding, but because of the stronger materials they could add priceless seconds of protection on your black tar ski trip.

As denim became more popular, companies could not keep up with production, Demand in the 1960s caused the use of the projectile loom to increase the efficiency of production so that more material could be made more economically and in larger quantities. Eventually, the older shuttle looms were sold as scrap or destroyed thinking they would never be needed again.

After years of efficient production of low quality materials for jeans, there has been an increased demand for the older vintage style materials. In the 1990s, Japan started producing more materials using the Japanese Toyoda (Toyota) loom. Currently, Japan still continues to produces the largest quantity of high-end selvage denim. However, there are a few US enterprises are beginning to make high-end selvage and American selvedge denim is making a comeback.

Selvedge is a stronger higher quality material due to the very tightly threaded process being weaved with a longer solid thicker single thread of yarn. To make the best use of the selvedge material you will find many jeans come with very long inseams either in 34” or 36”. This makes it ideal for motorcycles because you can roll them in a cuff. An important consideration that comes from making the cuff is when you mount your motorcycle; if the jeans ride too high, you can roll the cuff down to keep out a cold breeze, thus resizing your jeans on the fly.

Selvage denim is measured by weight in ounces of a square yard of fabric. Most of the items you are purchasing at department stores will be a lightweight denim fabric at or below 12oz. A middleweight material greater than 12oz will start to feel stiffer and when folded will maintain its shape unlike the thinner softer and more lightweight denims. When you take a good mid-weight to heavyweight selvage and combine it with Kevlar, you get a material that has a classic denim look but also something comfortable that can withstand the heat surviving longer than standard jeans should misfortune strike and you happen to kiss the roadway. Certain combinations of jeans and Kevlar have been proven to last between 4 seconds and 7 seconds when your denim greets the pavement.

Once you surpass the 16oz weight, the pants will become stiff enough that they can almost stand on their own. This material will be a much thicker and thus offers more protection. There are certain thick selvages, such as pants from Iron Heart and Naked and Famous, that range from 18oz up to 32oz. That is a stout and sturdy material, which looks and feels fantastic.

For significantly added protection, Kevlar is a great abrasion and heat resistant material that is often combined with denim for better abrasion resistance. There have been major advances in Kevlar materials reducing weight and thickness while retaining strength and durability. There are quite a number of great looking selvedge jeans combined with Kevlar. Take a look at some of the offerings from brands such as: Rokker, Ugly Bros, Deth Killers, Rev’iT, Icon, and Maple Jeans. Jean brands which are usually not selvedge denim but offer Kevlar are Drayko and Scorpion jeans.

Planning for a long trip means limited space on your bike. I decided to take a test ride to see if a single pair of selvedge Kevlar armored jeans would be enough to leave some gear behind. One place I was sure I could get a good variation of temperature is the Blue Ridge Parkway. Temperatures across the top of the mountains can vary as much as 20 to-30 degrees. Not all the jeans listed above contain Kevlar and pockets for armor, but Maple jeans satisfy both of those criteria. Maple jeans are 13.5oz selvedge, with Kevlar lining and pockets with Force field knee and side armor. One item that stood out for me about Maple jeans is that the Kevlar is sewn at the seams and not across the front of the knee. This kept a nice clean look rather than a patch job like so many other jeans.

My trek began as I started out from Atlanta and headed up to the base of the southern entrance of the Blue Ridge Parkway. That first day, the temperature was 85 degrees. I will tell you that Maple jeans combined with Kevlar and armor were quite hot. It was about as hot as I can comfortably stand. Since then, I have worn them in 90-degrees and I felt like I was melting. You could survive the heat, but not for long; especially if you are not moving down the road.

As I began to climb in altitude the temperature changed rapidly. Over three days of riding across the Blue Ridge Parkway, I experienced changes in temperature as low as 53-degrees and as hot as 80 degrees. The average mid-day temperature was in the 70’s. I can easily say that as far as the jeans go, I was very comfortable at all those temperatures and did not feel I had to put on chaps. The Maple jeans were very resistant to blocking the cold air in the 50’s; especially once I rolled the cuffs down. 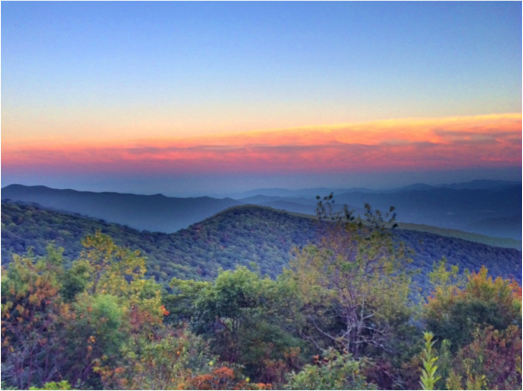 In the end, I covered 1,050 miles from my home, into Virginia, and back over to Atlanta. The jeans worked perfectly the whole time. I felt comfortable, safe and my jeans looked great. It was one of the best rides of my life with beautiful skies, great weather and spectacular sunsets over each peak.

There are a number of other jean manufacturers out there, but whatever you choose to wear, at least consider that there is a better more protective solution available that will look good. Get a pair and try them out; you might find that you fall in love with a new pair of SELVEDGE jeans that will add some peace of mind to your riding experience.